What do you know about pita bread? 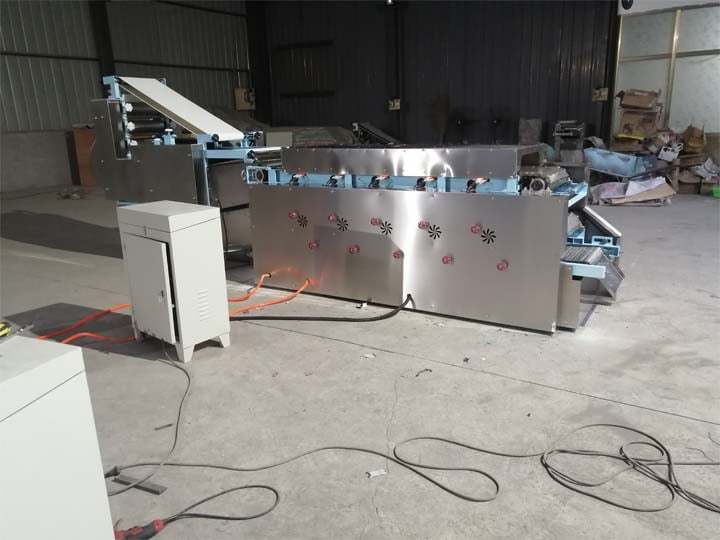 Arabic pita bread has a long history and many varieties. “Global Times” reporters have tasted many flatbreads from Arab countries. They have their own characteristics in terms of taste, ingredients, and production methods. Statistics show that some Arab countries will encounter problems in the quantity, weight, materials, or supply of the pie, and the Arab world is experiencing a “big pie crisis”. As the staple food of most people in Arab countries, high pie prices may trigger political and social crises.

Pita bread, as the staple food of the Arabs, deserves it. Usually, pita bread is free in Arab restaurants. Arabic flatbreads are baked, divided into two types: machine-made by pita bread production line and hand-made. The freshly baked pita bread is divided into upper and lower layers, the outer is charred and the inner is tender, steaming, and bulging like a small leather ball. Different Arab countries have different pies.

For example, Lebanese flatbread, which is very popular in various Arab countries, is flat and firm, very chewy, and has a sweet aftertaste after eating. Many Jordanian flatbreads are baked on stone, and the shapes are uneven and distinctive, and the entrance is chewy. The Moroccan flatbread is thick and thick, and it is very large, and it tastes very gluttonous, and has a sense of fulfillment. The Bedouins in Gulf countries such as the United Arab Emirates and Saudi Arabia are still simple, using discarded iron buckets to bake pita bread. Although the appearance and sanitary conditions are not satisfactory, they can also relieve their hunger. In addition to the traditional rice flour, there is also a kind of Egyptian flatbread that is roasted in coarse flour or added with some bran containing crude fiber. Although the import is a bit rough, it contains trace elements and is good for health.

When you visit an Arab’s house, you will see a basket full of pita bread in the center of the table, and dozens of large and small plates are placed around the stars like a moon. The colorful dishes on the plate are dazzling. There are bright red tomato salad, green pickled cucumber strips, verdant lettuce, chopped fennel, traditional Arabian holmes sauce, characteristic white tahini, and a very finely chopped raw lamb Mud, and all kinds of cold dishes that are not well-known. To eat these “cold meats”, there must be a pie to match, and the pie plays the role of “outlining and guiding”. The Arabs will yell as they eat: “Some more pita bread!”

After eating flatbreads and cold dishes, hot dishes are served. Most meat and fish are grilled or fried. At this time, pita bread plays an important role in serving dishes. Some people eat vegetables, and some eat meat. Some people will habitually eat a few bites of pita bread after eating hard dishes at the end of the meal.

In Egypt, people who are more particular about eating pita bread usually stuff some “team” (a kind of vegetarian beanballs in Egypt), roast meat, or homemade pickled sauerkraut into the flatbread, dipped in a thinly braised sauerkraut. Fava bean paste or holmes sauce, then with a bit of salty, sour, and refreshing olives. “Global Times” reporters daily contact the low-level people who eat flatbread for three meals a day. If you can have “Fuer” (broad beans) as a side dish, life will be extremely happy.

In the native Egyptian language, the original meaning of the pita bread is “life”. Arabs often talk about flatbread. There is a proverb in Arab countries: No matter how big a pie is, it is not a big pot. Use the relationship between the pie and the pot to describe a person with a big pattern and a broad realm.

Flatbread: the “barometer” of people life

In most Arab countries, the government has invested huge subsidies on the pie that is related to people’s livelihood. Therefore, the pie is generally very cheap, and people who are financially struggling can always afford the pie. In countries such as Egypt, Jordan, Syria, and Lebanon, people only need to symbolically pull out a few copper plates to eat the fragrant flatbread. It can be said that the pie has become a “stabilizer” of Arab society and a “barometer” of popular sentiment and public opinion. An Arab country thinks tank website recently published an article that the price increase of pie was one of the important reasons that triggered the “Arab Spring” event in 2011.

Due to the dry climate, frequent wars, and rapid population growth, many Arab countries are currently facing food shortages including wheat, and have to use large amounts of foreign exchange to import basic necessities such as flour. For example, Egypt is the world’s largest wheat importing country, buying about 10 million tons of wheat every year, and Egypt’s annual subsidy for flatbread alone is as high as more than 3 billion US dollars. Even in an agricultural country like Lebanon, the situation is not optimistic. Among the cereals, wheat is the most important part of the Lebanese diet, and each person consumes an average of 130 kilograms per year, ranking first among all types of cereals. In 2017, the total wheat consumption in Lebanon was 770,000 tons, of which local wheat accounted for only 16.9%, and all the rest came from imports. At the same time, the government has to provide a huge amount of foreign exchange to subsidize the sale of pie, otherwise, it will be too expensive and will cause strong dissatisfaction and protests from the people, and the government is in a precarious position.

According to research by Arab scholars, as early as 10,000 years ago, prehistoric humans could simply bake pita bread. Historians believe that when the mixture of wheat and water was left in a warm place to release naturally-occurring yeast and produce an expanded dough, the Egyptians unexpectedly discovered the secret of fermentation, and the fermented pita bread came into being. According to legend, an Egyptian slave in the era of the Pharaoh accidentally fell asleep while making dough for his master. When he woke up, he found that the fire for baking the flatbread had been extinguished, and the raw dough had been fermented and expanded because he was afraid of being caught by the master. Scolding, he hurriedly raised the fire, but the expanded dough cake on the stove to bake, and just like that, the fermented flatbread was born.

The pita bread is the ration of the Bedouin in the desert. There is a saying that the Bedouin was the earliest inventor of flatbread.

In August 2019, Israeli scientists discovered a 4500-year-old yeast in ancient Egyptian pottery fragments. In addition to being used as a raw material for winemaking, ancient yeast was also made into bread and flatbread by American biologists and ancient Egyptologists, successfully recreating the taste of pita bread in ancient Egypt.

What is Dough Divider Rounder?

What is an Easy Cupcake Recipe?

Differences Between Domestic Oven and Big Oven for Bakery

Solution for the Batter Not Sticking to the Automatic Chapati Maker